We arrived at the picturesque Virginia International Raceway (VIR) on Saturday October 5th. This was our 33rd SCCA Runoffs that we were to participate in.

As we set up our paddock spot several race teams were finishing up their second day of testing. Already there were teams repairing damage and swapping motors and race day was a week away. VIR is a 3.27mile track that is very technical and very fast. Catching traffic at the wrong place will cost you dearly with the result of many ugly offs. We were testing on Sunday and Monday. Testing went very well with little issues and the Tiger showing speed. On Monday’s test I pushed too hard coming out of the climbing esses that resulted in a spin. Lap times were not what was expected but reviewing data showed promise if the driver could put it all together. Tuesday was the first qualifying session and it was just the GT2 cars. We arrived at the track with 29 entries in GT2 but thru the test days attrition 24 GT2 cars took a time. We had the misfortune to find a trail of oil dropped by fellow competitor as we started the 3rd lap. The Tiger’s right rear tire finds the oil and next thing I know I am backwards off the track between 2 and 3. The tires were severely flat spotted so our session was over.

For Wednesday’s qualifying session we started at the rear and with the addition of the GT1 cars on track we had 37 cars on track. The car was working well as I worked my way through the traffic and got decent lap time of 1:56:818. The time was good enough to have us 9th on the time sheets still off 2 seconds of my rolling lap times on data. Thursday was the last qualifying session once again just the GT2 cars and warmer temps which will help get the slicks up to temps. The Tiger felt great and we quickly got up to speed. I was following the Lou Gigliotti’s Corvette thru the esses and he was throwing up a dust cloud every lap. I decided to drop back and get a gap so I good get a clean lap. I had no one behind me so I let the Vette get 20 seconds up the track. I started the hot lap coming out the last turn known as the hog pen when I heard a loud pop. The car pivoted right towards the guard rail and I got off the power and onto the brakes and the car went off track to the left. I got on the radio that we were hit in the rear. Janet radioed back that there was no one behind me but that I had to keep going or may catch fire as the grass was extremely dry. I made it back onto the track but when I applied power the car steered right when I let off it steered left. I made it past the flag stand and parked out of the way. As the Tiger was loaded on the rollback wrecker, we could see that the left rear lower trailing arm and shock mount had separated from the axel tube. We get the car back to our paddock spot and decide on action plan to remedy the issue. We decided it was best to swap rear ends as each rear end is setup with their trailing arms and shock mount. We had the back up rear end assembly into the Tiger within a few hours and off the dinner we went. Friday was the 1st day of championship races and we did not race until Saturday. We had all day to finish the swap and then prepare for the race. After finishing preparing the Tiger, I took it out for a hardship lap between races on Friday, the car felt good. We watched the A Sedan and GT3 races then off for dinner and to get a good night sleep for our race on Saturday. 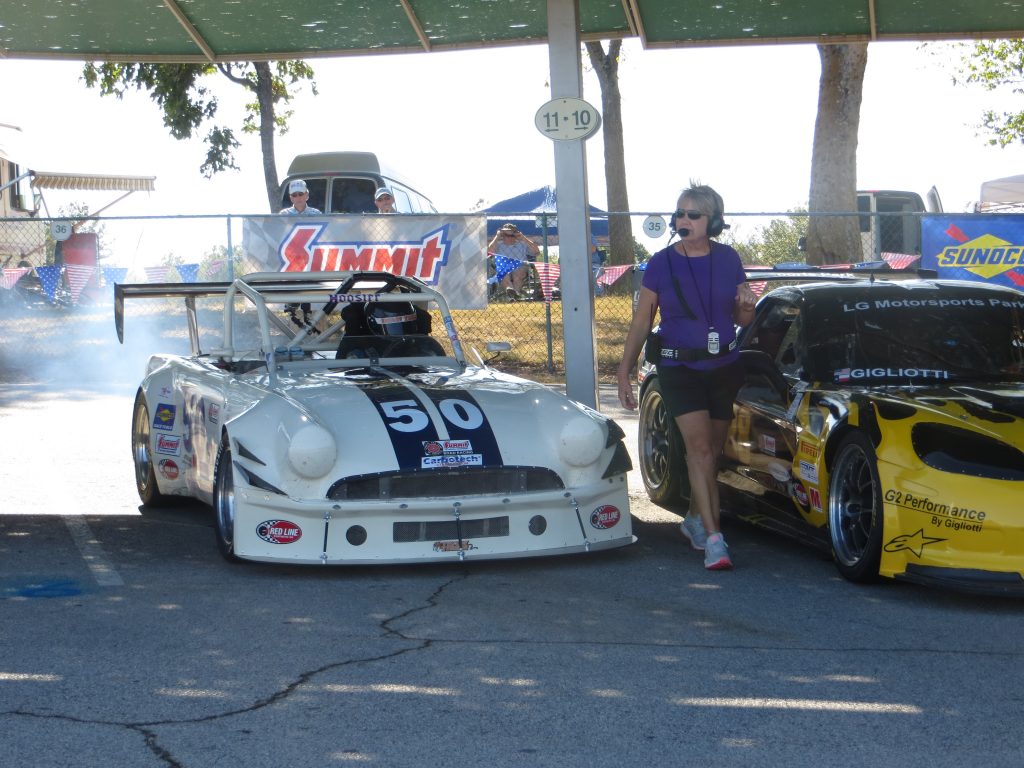 It has been a week since we arrived at VIR and finally at 2pm we would have our race. All week long we had a very easy time of it. Thursday was the worst but compared to the carnage that we observed we had it very easy. We were to start 12th out of 24, right in the middle. The weather was excellent with not a drop of rain to be seen. The start was slow and the outside line seemed to be having a better run into 1. A Mustang behind me makes a wild move up the inside and slides in front of the car I was following into 1. It was a miserable start for us we lost at least 6 spots thru the first 3 turns. I get by one of the cars on the back straight and as we enter the “roller coaster” the sequence of corners after the long back straight there were 2 cars off the track. That was 1 lap! Coming out of turn 1 on second lap the 2 black Corvettes that started on either side of me were spinning. I lose 2 spots as we work our way thru the carnage. On lap 3 I got the Tiger moving forward and pass 3 cars however a car had dropped oil on the exit to hog pen and 1 slid but catch it. The Silver Corvette behind me hit the same oil and his left rear collects my right rear (another tail light). The Tiger continues the Vette had to pit to replace a flat tire. As the Tiger goes up thru turn 1 the right rear tire is billowing out smoke. I take it easy thru the esses and the back straight but the smoke seems to have diminished so I pick up the pace. We move forward through the field and consistently set fastest trap speeds in excess of 160mph (a first for the Tiger). The rest of the race was uneventful with consistent lap times at 1:58s. We finished 9th which was disappointing but like the crew says the car was able to be rolled into the trailer. I was amazed at the damage when I finally climbed out of the car but the car worked well. 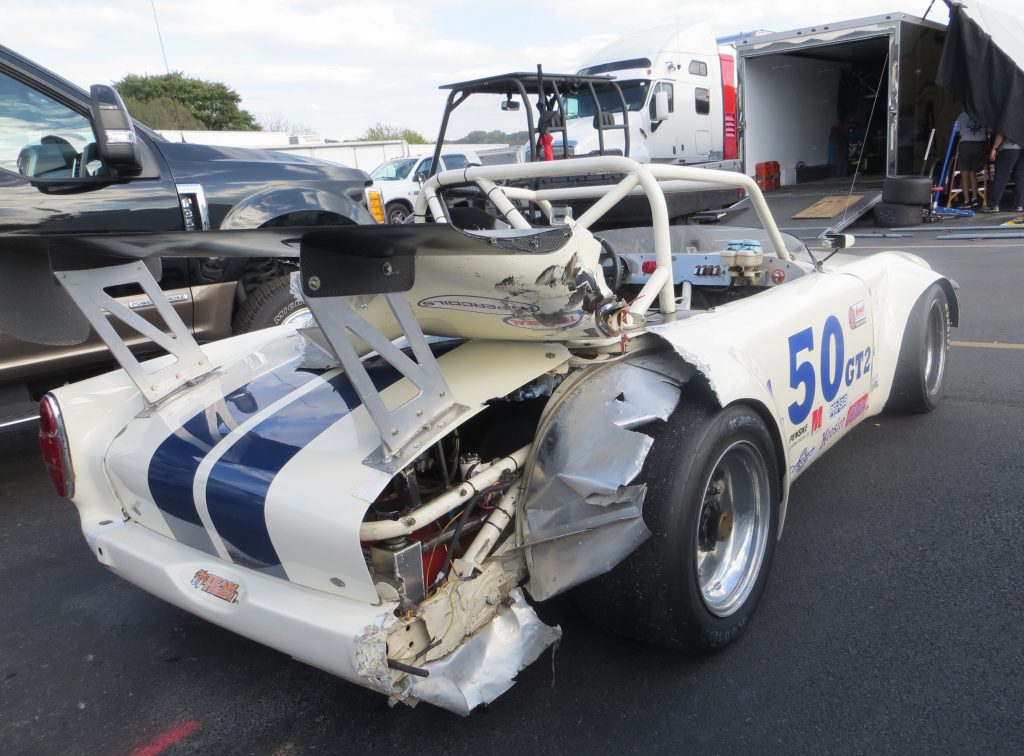 Preparations have already started to ready the Tiger for the 2020 season.